We are a litigation firm in Southern California, and provide legal advice and counseling to employees. We have handled hundreds of cases involving discrimination, harassment and retaliation under the California Fair Employment and Housing Act (“FEHA”). We handle matters throughout all counties in Southern California.

If you believe you have suffered unlawful conduct at work, please contact us immediately. Thinking of filing a claim with the EEOC or the Department of Fair Employment and Housing (DFEH). Call us first. See our LINK to the EEOC and the DFEH on our Resources page,

Facts Regarding Disability Discrimination at Work.

Take this test: Sexual Harassment in the Workplace

Are these situations sexual harassment? – True or False?

1. Only women can be sexually harassed.

4.  After the harasser was warned, he never touched his co-worker again. He only looked at her while she worked.  That is not sexual harassment and the company took timely action once they became aware and cannot be found liable for sexual harassment under these circumstances.

5. If the employee was never touched there was no sexual harassment.

6. The company can’t be liable for gender discrimination if there was only sexual harassment.

7.  Only the company is liable if sexual harassment occurs.

8.  There is no sexual harassment if the harasser is only joking because there is no intent.

9.  If the harassment is never reported, the company can never be liable.

11.  Another worker was viewing pornographic pictures.  The pictures were viewed on the computer and sent by email between friends and not to the claimant.  None of the pornography was given to anyone else.

All of the statements are FALSE.  If you have experienced similar conduct at work, you may have suffered sexual harassment.  If your supervisors cannot answer these correctly, your company may be at risk.  Explanation as follows:

1. Sexual harassment happens between genders and among genders in all combinations.  Employers can be found liable for all such harassment.

3.  If a male co-worker is not promoted because a female worker received preferential treatment, the employer can in some instances be found liable. This is sometimes known as third party quid pro quo sexual harassment.

4.  Staring at an employee can amount to further sexual harassment.

5.  Sexual harassment can be verbal, if a jury determines that the conduct was sufficiently severe or pervasive.

7.  Harassers can be held individually liable and sued as defendants in Superior Court in California for the hostile work environment that they create.

8.  If the conduct is “unwelcome” and is of a sexual nature and severe or pervasive, it does not matter if the harasser was joking.  It is still sexual harassment.

9.  An employer is strictly liable for harassment by a supervisor, manager, or officer of the company.  No notice or complaint is required.

10.  This situation is referred to as the “after acquired evidence doctrine.” Such conduct is not necessarily a complete defense for the employer.  The law perceives that even if the employee was hired under false pretenses that does not give the company and its employees free liberty to sexually harass the employee.  This situation can effect the amount damages.

11.  If employees just merely see the pornographic material that is being viewed by co-workers and complain, it can lead to sexual harassment if it is allowed to persist.  Such activity in the workplace is a recipe for sexual harassment. 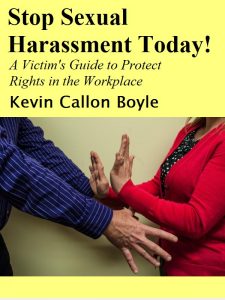